Power-to-X is a term for technologies taking surplus renewable electricity from wind, solar or water and convert it into other energy carriers to be able to store the energy for later use and absorb energy fluctuations.

The first step of the power-to-X process is to convert the renewable power into hydrogen (H2) by electrolysis. Hydrogen, the smallest molecule we know, does not emit CO2 when burnt. It can be used immediately, or it can be stored in pressurized tanks and retrieved when supply is low.

There are several different ways of utilisation: Feeding hydrogen into the gas network, displacing some of the CO2 containing natural gas (power-to-gas), or through a methanation process with CO2 converting the hydrogen into methane (power-to-methane). The methane can be injected into the natural gas network replacing the fossil natural gas (power-to-gas). The CO2 source for the methanation process could be biogas produced from biowaste in biogas plants or wastewater plants. Other concepts include production of methanol or ammonia to be used in fuel cells in cars and ships, or synthetic fuels to be used in conventional car and jet engines (power-to-liquids). This is all achieved through synthesis that involves hydrogen and a CO2 source that could, again, come from the process of converting waste into biogas.

The “green hydrogen” generated from renewable energies can also be used in fuel refining (hydrogenation) in conventional refineries or as a basic chemical in many different industries (power-to-chemicals, power-to-plastics). Finally, the stored hydrogen can also be converted back into electricity via fuel cells when needed (power-to-power). 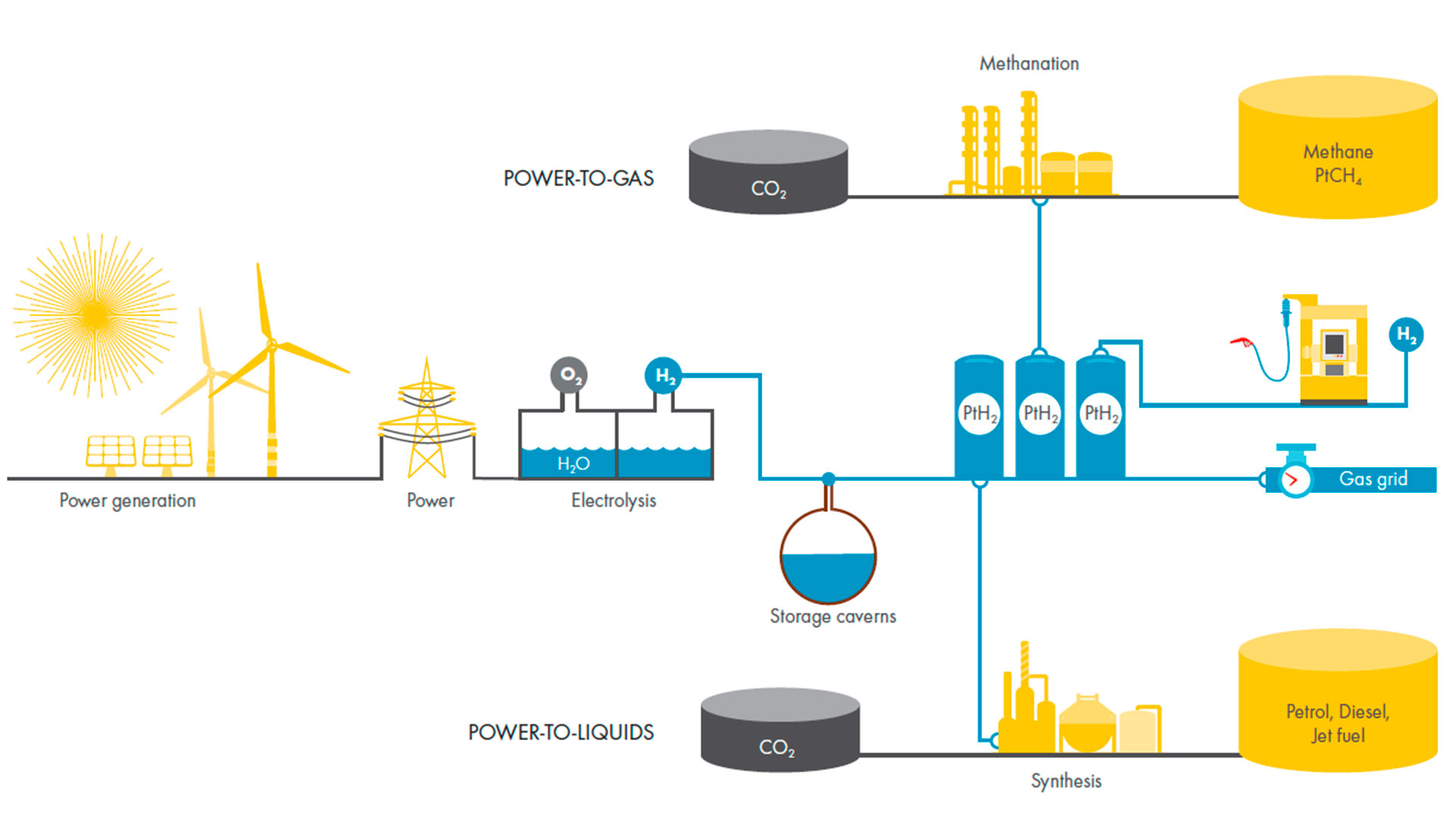 Many countries are looking into adding hydrogen to the existing gas networks to decarbonize natural gas. Gas with concentrations of up to 20% hydrogen can be transported in the existing natural gas network without the risk of damaging gas installations, distribution infrastructure etc.

Until well into the 20th century, hydrogen-rich town gas with a hydrogen concentration above 50% was distributed to households via gas pipelines in e.g. Germany, the USA and England. It could be assumed that many of the gas transport networks, distribution lines and storage facilities that were operated in the past are still in use today.

Blending hydrogen into natural gas pipeline networks has also been proposed as a means of delivering pure hydrogen to markets, using separation and purification technologies downstream to extract hydrogen from the natural gas blend close to the point of end use. As a hydrogen delivery method, blending can defray the cost of building dedicated hydrogen pipelines or other costly delivery infrastructure during the early market development phase.

The possibility of converting existing natural gas networks (primarily used for municipal heating supply) entirely to hydrogen is being explored in the UK and in the Netherlands. In Denmark, a small, closed natural gas network with pressures ranging from 3 to 65 bar is being tested with up to 15% hydrogen.

AVK contributes to projects testing hydrogen distribution. From AVK in the Netherlands gate valves are supplied to a project at Arnhem Nijmegen University where 100% hydrogen is being tested. AVK UK and AVK Donkin are involved in a project (H100) where they are supplying flow limitors to a test network with 100% hydrogen. The flow limitors are used to secure the network in case of a pipe burst, where it will cut off supply to avoid accidents.

To AVK, embracing the future with power-to-x includes being able to confirm and to document that our products meet the rising needs of this industry. Among other factors, we are documenting and type testing our products against all relevant industry norms. This includes the currently developing specifications towards specific media, such as e.g. hydrogen.

AVK visited a small, closed natural gas network in Denmark. With pressures ranging from 3 to 65 bar, they perform tests with up to 15% hydrogen.

Flow limitors are used to secure the network in case of a pipe burst. AVK UK and AVK Donkin are supplying flow limitors to a test network with 100% hydrogen.